A Brief History of Quakerism

Home
About Us
Our History
A Brief History of Quakerism

A Brief History of Quakerism 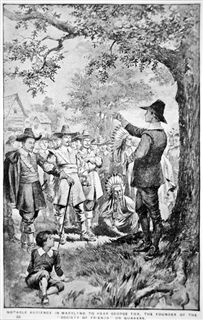 One such seeker, George Fox, experienced a revelation on Pendle Hill, in the heart of England’s Lake District. This revelation led to the birth of the Religious Society of Friends and has been at the heart of its life and witness ever since. From this revelation, George Fox derived his essential insight, which was that there is “that of God” in everyone, and that one can gain access to the God within through stillness and the practice of silence.

Quakers arrived in America very early in their history. The first Quakers came on preaching missions in 1656 to Maryland. Later, as a result of the persecution of Quakers in England, many Friends emigrated to the American colonies. William Penn arrived in America in 1681 and founded Pennsylvania as the "Holy Experiment," a colony governed on the ideals of the Religious Society of Friends.

The word “Quaker” was invented originally as a derisive term, used to mock the believers because they “trembled and quaked with religious zeal.” Eventually Friends themselves adopted the term, thereby shedding it of its scornful nature.